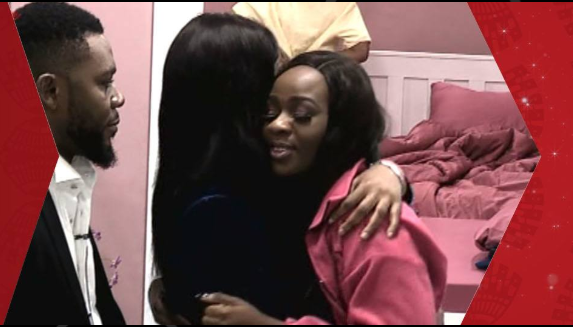 It was a tumultuous night in the Love Pad to say the least. It seems our Couples have been left reeling after the first night of Nominations.

With Chivia (Chiddy and Sylvia) having nominated Jeriton (Jerry and Meriton), it would have been easy to say it was because there was bitterness between Jerry and Sylvia, who were previously paired up. But it wasn’t that at all.

Chiddy Bankz dove into the heart of the issue to chat to both Jerry and Meriton.

He said he told Sylvia to come up with a name because they had to Nominate someone, but she couldn’t do it.

“When we went in there, we couldn’t talk out,” he said. “And I asked her what she came up with. Micherry, micherry, Micherry, she said. Me, I didn’t understand what she was saying. I was hearing Jerry, Jerry, Jerry. Do you understand? So that’s why I put that down. She was also almost crying yesterday. It would look like jealousy, she said. That didn’t come from anywhere. It was a mix-up.”

Jerry was also understanding. After Chiddi explained it to him, he responded: “I understand. I did tell her we still have a long way to go and there’s still life outside here too. There’s a bigger picture. tHe future is still bright. I don’t hold anything against anyone.”

Stay on this website for more news from the ultimate love guest 2020.