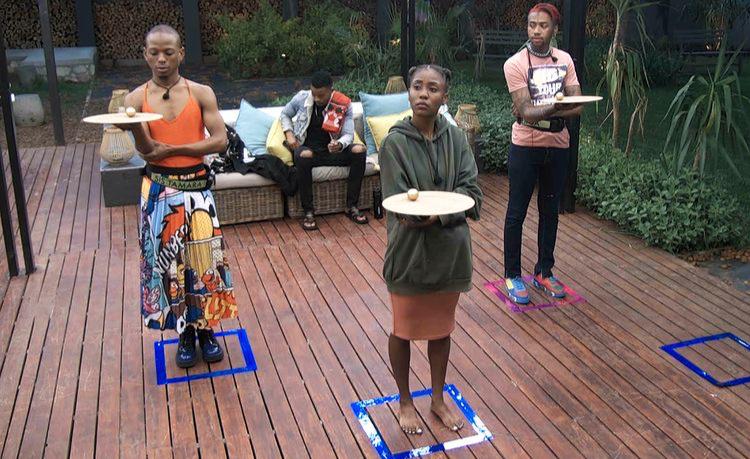 The Big Brother Mzansi Veto Power winner will have a place in the final week of the reality TV show season 3.

The Ultimate Veto Power Game has been played, and Themba has emerged victorious, although the others should be given props for their staying power.

It seems easy, but it isn’t: for the second part of the Ultimate Veto Power (UVP), the four Housemates had to balance a ball on a plate that was being held by one arm, while standing in a small square. They were free to quit at any time, but violations of the rules would have them disqualified. This, basically, is a test of endurance. After a surprisingly short amount of time, arms get tired, backs get sore and legs turn to stone. The only thing keeping them in the game is the promise of a possibility of R2 million – and sometimes that’s just not enough.

Tulz was the first Housemate to leave the game – he was disqualified for breaking the rules. After a respectable amount of time, Thato decided that she had sunk enough cost into this endeavour and bowed out.

That left Sis Tamara and Themba in the game, and they were not going to make it easy on each other. There is no doubt that these two have earned their places in the Top 8. Sis Tamara has proven to be a very competitive Housemate, and Themba has been navigating the ever-changing shifts in the game with aplomb. It seemed inevitable that it would come down to these two.

Eventually, a little after 07:00 this morning, the game ended. Sis Tamara simply could not carry on, anymore. Putting the plate down and stepping out of the square, Sis Tamara gave Themba the Ultimate Veto Power.

There was not a lot of exuberant celebration, however. Themba was finished. Both he and Sis Tamara could barely move their right arms, and they struggled with the simple Task of hugging each other. Themba literally crawled his way back into the House.

Stay connected for the latest news about the Veto Power winner in the Big Brother Mzansi 2022.