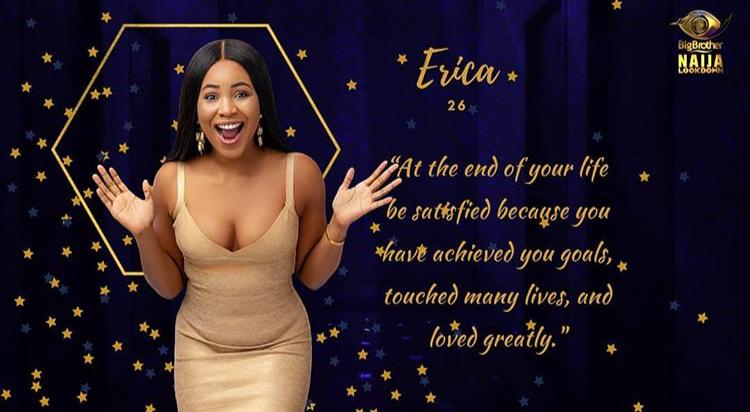 Why was Erica Disqualified from Big Brother Naija 2020.

Big Brother Naija housemate, Erica has been disqualified from the lockdown 2020 show for breaking house rules of the ‘Lockdown’ edition which led to her disqualification from the show.

The 26-year-old Abia-born housemate broke the rules after the Saturday night party with DJ Kaywise in the lockdown house.

Erica rained abuses at Laycon and other housemates who refused to support her after approaching Laycon to clarify his statement that she tried to kiss him severally as reviewed by Ebuka.

Still burning in anger after Laycon refused to prove beyond reasonable doubt that she tried to kiss him, Erica lashed out at him and Prince.

Videos of Erica assaulting Laycon has been trending on the internet as millions of people see the need to disqualify the housemate from the reality TV show.

These are some of the BBN rule Erica Violated:

1. Erica threatened to kill Laycon outside the house.

2. She also poured water on the Head of House (HoH) bed in order to stop Prince who is her deputy from sharing the lounge with her.

4. She also used the word ‘vote’ while discussing with Kiddwaya. She had said she hoped that the viewers vote out Laycon because he is manipulative.

The above offences contravenes Biggie’s rules, which stipulates that both Head of House and their deputies must sleep on the same bed for the week.

Threatening to kill Laycon and claiming she will do anything in her power to make sure Laycon suffers in life contravenes the house rules which state that “housemates should never threaten, intimidate or act violently towards each other.”

Also, using the word ‘vote’ is against the warning issued by Biggie last week which states that housemates must not canvass for vote in the house.

Erica was disqualified for those acts and also admitted that she was ready for any consequence.

Recall that Erica was already on two strikes before the disqualification from the lockdown show.